If you loved watching “ER”, then you will certainly love “Gray Matter”- an autobiographical book by Dr. David Levy containing stories that happened to real patients. “Gray Matter” is not simply a book written by a neurosurgeon telling about his stressful life and life saving brain surgeries. Instead, “Gray Matter” is a spiritual book of a doctor who uses his brain and hands the way God has gifted him, as he struggles with the ordinary issue of faith- to pray or not to pray? 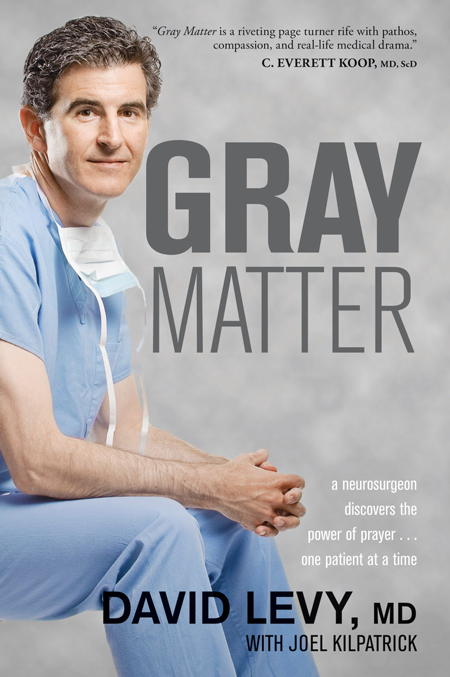 As a professional and reputable surgeon in the medical community, Dr. Levy in his autobiographical book “Gray Matter” states that his job as a neurosurgeon involves difficult, stressful and life saving situations. He believes that his role in this world as a neurosurgeon is to make people feel better- mentally, spiritually and physically. His journey in his book “ Gray Matter” begins when he started to talk with its patients about their lives. He found that most of his patients were carrying a baggage of bitterness and unforgiveness for people who have in some way hurt or disrespected them in their past.

Dr. Levy started asking its patients whether he could pray for them in the examination room. In his book, “Gray Matter”, he explains about his struggle with the positive and negative sides of asking such question: Will I be fired? What my colleges will think of me? Will my patients think that I lack the abilities to do the job? In his book he explains that most of the patients he asked looked confused, and surprisingly a large number of them said “Yes” to his question.

With time, Dr. Levy started to pray not just one-on-one with his patients in the examination room, but also in the pre-op room with all the nurses and other doctors. He even moved to the point when the patients started asking Dr. Levy to pray for them. It is a fascinating achievement of Dr. Levy’s courage in the medical world to give its patients reason and willingness for living.

“Gray Matter” contains many real life struggles and cases mixed with faith and spiritual believing. Dr. David Levy and his journalist/writer Joel Kilpatrick brilliantly build the stories and created an amazing book where the reader is encouraged to put aside his/hers pride and embarrassment and to start praying in all matters. “Gray Matter” is not described as a preachy book, as Dr. Levy never forced his patients and staff members to pray with him. It is considered as marvelous piece of work that is recommended for anyone who is struggling with his/hers prayer life.

This entry was posted on Monday, June 16th, 2014 at 1:32 pm and is filed under Books. You can follow any responses to this entry through the RSS 2.0 feed. Both comments and pings are currently closed.

Even though we spend about a third of our lives sleeping, our bedrooms... more»

Tips to Maximize Storage Space in Your Ute

Taking full advantage of the space available in your ute is very important to... more»

There are indoor plants that need water every few days, while others can go a... more»

The concept of an outdoor kitchen has been part of the Mediterranean living... more»